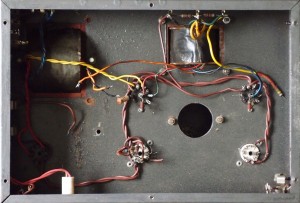 I decided that almost everything had to go so I spent some hours last night removing components from the Northcourt chassis. I had intended to keep the valve sockets but, in trying to unwrap the component leads, it became pretty clear that the sockets were flimsy and it wasn’t going to be worth the effort. The rivets will be drilled out and the sockets will be removed too. That will really only leave the paper-insulated transformers and the chassis itself which is pretty much what I expected. The amp was around fifty years old and the capacitors and resistors were showing their age.

The amps I have built up to this point (see the side-bar) have placed all the valves in a row which has allowed me to use tag-strip – between sockets and in front of the tone controls – to mount the components. It results in a messy layout but it does allow the circuit to be changed fairly easily. That was how I was hoping to lay out the Northcourt but I can’t see how it would work. The valves/tubes are laid out in or square rather than a row and are widely spaced which would require long leads between sockets (as per the original layout). 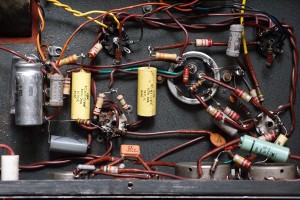 Putting tag strip in the middle of the square doesn’t work because of the can capacitor. Placing a tag-strip between the ECC83s (12AX7s) and the tone controls would work well but that’s a relatively small part of the circuit; certainly not enough to justify the approach. Clearly it is necessary to use a tag-board or turret-board. I would prefer to leave the valve/tube sockets visible for rework but there is only 40mm between the ECC83 (12AX7) and EL84 (6BQ5) sockets which does not provide enough space for larger components (e.g. smoothing capacitors). The only sensible approach seems to be to use a wider turret-board and allow it to cover some of the sockets (perhaps only one). Flying leads will have to be soldered onto the socket(s) before the turret-board is put into place.

I’m going to use the perforated turret-board and screw-in turrets provided by www.ampmaker.com to allow the circuit to be changed relatively easily. The-screw-in turrets are expensive – especially when compared with tag-strip – but it’s the only sensible approach. Thinking about expense; the amp cost me £85 and the capacitors from AudioCap cost £16. Now that the initial circuit and layout have been sketched out I have been able to buy the remaining bits and pieces which has added another £50 to the cost giving a total of £151 which which seems like a pretty good deal for a hand-wired bass amp. Now the parts have been ordered so the next post should show some real progress.